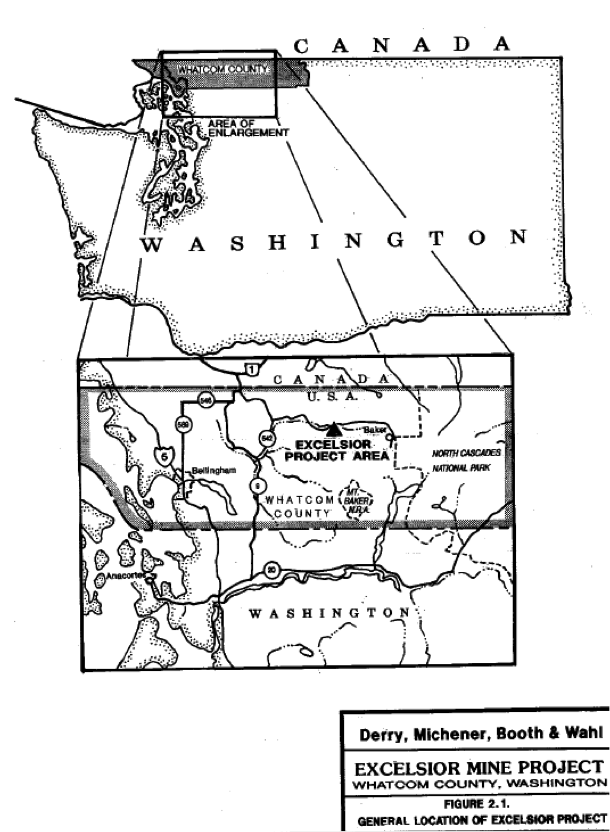 The Excelsior mine is located in steep slump block terrain in a heavily wooded area of Whatcom County, Washington, on the western slope of the North Cascade range. The Excelsior Mine historically produced silver (Ag) and Gold (Au) from 50,000 tons of high-grade ore from 1902 to 1916. Exploration and substantial core and reverse circulation drilling from 1968-1990 resulted in the outlining of a historic mineral resource (reported as Probable Reserves) of 4,148,000 tons grading 0.042 ounces per ton Au (opt/Au) and 2.604 ounces per ton Ag (opt/Ag). This reserve is an irregularly mineralized semi-tabular body, about 1300 ft. long, 405 ft. wide, over a general thickness of 100 ft. and could be mined from a shallow pit. It is a bulk-mineable, disseminated epithermal, submarine – volcanogenic, Ag-Au deposit, consisting of a 7,820,370 tons Au-Ag indicated and inferred resource containing a high-grade, proven/probable, 500,000 ton ore body grading 0.13 opt Au and 12.5 opt Ag. The geological analysis from the M.A. Hawksworth’s (1989) report revealed that the property has 500,000 ounces (oz.) of Au equivalent indicated historic resource. Additionally the company has recently discovered several large copper-gold drill targets located 600 to 800 ft. west of the mine workings. The company has outline an aggressive drilling program to increase and expand the overall historic resource mentioned above and confirm the recently discovered copper-gold targets.

The Excelsior project and claim blocks are located in the west half of Section 5 and the east half of Section 6, T. 39 N., R. 8 E., Whatcom County, Washington within the Mt. Baker-Snoqualmie National Forest.
Access to the claim blocks is gained from Bellingham, Washington by State Highway 542 to the village of Glacier some 36 miles to the east. One mile east of Glacier a 6-mile gravel US Forest Service leads to the property. A 1-mile mine road leads to the mine site and numerous drill roads which give the company additional accessibility.

Within the above area there are 10 claims totaling 200 acres currently. The location of an additional 20 mining claims have been surveyed and are awaiting filing which will complete 30 claims totaling 600 acres collectively.

Companies that have previously studied the deposit consider it a submarine epithermal volcanogenic Ag-Au deposit. It appears that the permeable units within the Wells Creek Volcanics (lower green tuff, dark sediments, felsic volcanic breccia, felsic volcanics, grey siliceous tuff and upper green tuff allowed the movement of hydrothermal fluids. Brecciation of some of the units may have been caused by hydrostatic boiling. The alteration and associated minerals are indicative of an epithermal deposit. The silver–gold mineralization is associated with copper, lead and zinc minor amounts of copper, lead and zinc, but pyrite is ubiquitous .

A copper geochemical anomaly is located west of the mine. Recent geophysical work (CSAMT) has discovered several large-tonnage copper-gold targets west of the mine. This is consistent with other similar volcanic massive sulfide (VMS) deposits which contain gold and silver.

The ore deposit was first located in 1902 and later became known as the President Group and Great Excelsior Mine. Approximately 50,000 tons of Au-Ag ore containing 7 opt Ag and 0.1 opt Au was mined from the Big Stope zone prior to 1916 when the mine was closed due to WWI and other factors. In 1967, ASARCO began the first of several exploration programs to develop a large open pit mine. This was subsequently followed by 7 other companies in response to fluctuating metal prices. The list includes: Silver Standard (1972-1975), Hanna Mining Company (1975), Quintana Exploration (1976), US Borax (1977-1985), Steelhead Resources (1985-1990), FMC Gold(1989) Stanford Metals Ltd. (1990-1991), and Arizuma Silver, Inc (1995-1998). The model developed by most of the previous exploration programs was one of westerly dipping zones of syngenetic gold-silver mineralization related to a distal volcanic massive sulfide environment. Drilling was focused on exploration and development of a silver-dominant, bulk tonnage deposit. Stanford Metals believed that there is an extraordinary potential for the discovery of thick, high-grade, gold-dominate ore bodies which could be developed for underground mining, but they were unable to secure additional financing with the results of their earlier drilling program due to market conditions. Additionally, the company lacked an understanding of the complex structure of the “Mine Series” rocks and did not have an offsite milling solution available at the time. 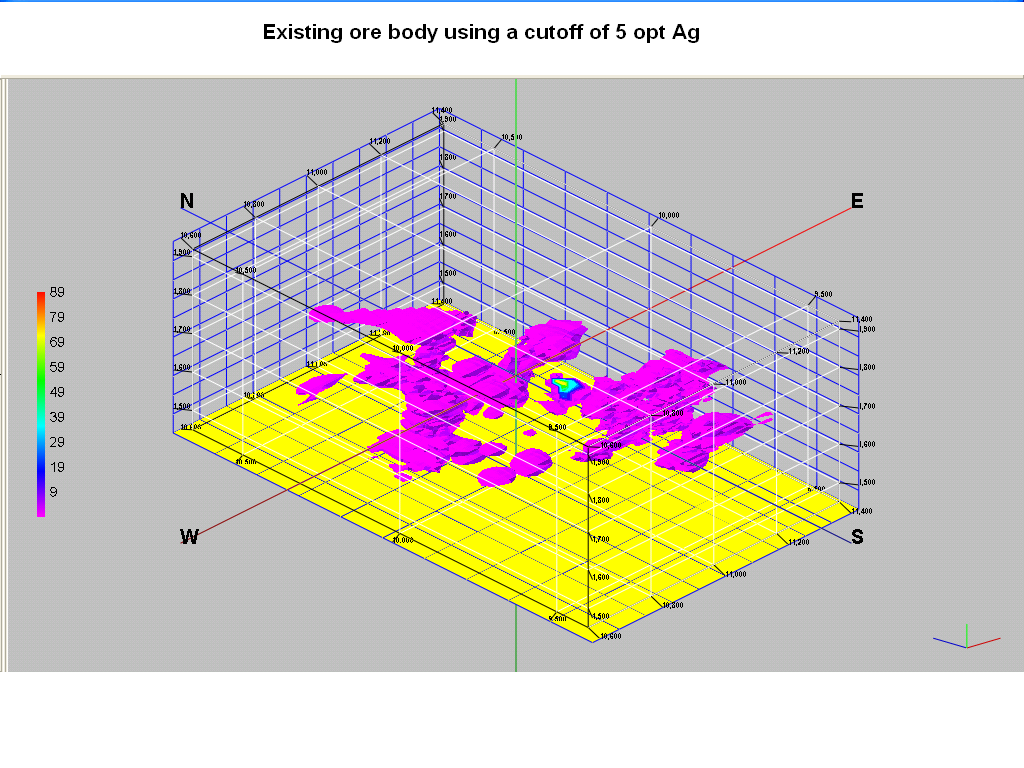 The Excelsior is a bulk-mineable, disseminated epithermal, submarine – volcanogenic, Ag-Au deposit, consisting of a 7,820,370 ton Au-Ag indicated and inferred resource, striking N300E open to the southwest and northeast (along strike) and to the west.

The high-grade ore (Ranging from 10 to 100 opt Ag and 0.15 to 1.1 opt Au) is localized in northeast trending faults, fractures and shears contained in and parallel to the Big Stope Zone. The primary feature of the Big Stope Zone is a sedimentary breccia consisting of altered breccia fragments up to 25 cm (1 ft) in diameter. Where drilled it has a strike length of over 800 feet and has been traced on the surface for over 2.17 km (7,000 ft). The explored portion of the deposit is located on a large down-dropped landslide block. There are 115 core and reverse circulation holes delineating a 4.8 million ton indicated resource of .07 opt AuEq (Ag and Au values combined). This previously delineated ore body contains approximately 500,000 oz. of AuEq indicated resource.

Within the larger resource is a 500,000-ton underground-mineable ore body, consisting of 12.5 opt Ag and 0.13 opt Au of historic proven/probable reserves. Within this high-grade zone is an even higher-grade zone containing a 300,000-ton ore body assaying 0.207 opt Au and 20.1 opt Ag (Tshauder, 1999). The author of the geological report goes on to say that he believes there are five high-grade pipes, similar to the “Big Stope pipe” each containing approximately 94,000 tons, outlined by 20 drill holes of the 106 drill holes he examined.

Arizuma contracted a CSAMT study of the area west of the mine workings which located several conductive anomalies, believed to be feeder pipes and/or Cu-Au massive sulfides. The evidence for this is based on the configuration of the anomaly, geochemical sampling and the presence of a near-by copper gossan. If management’s hypothesis is correct it will increase the high-grade resource by a factor of five or more. The company will be drilling these targets.

The mineral resources are located within an area some 1,300 feet in length averaging 405 feet in width, over a vertical thickness in the order of 100 feet, that has been defined by both diamond and reverse circulation drilling.

Steelhead Resources purchased the option agreement from US Borax, and continued to develop Excelsior’s potential for open pit mining. In 1988 Steelhead Resources estimated reserves (resources) based on the 61 reverse circulation 5.5 diameter holes. The tonnage and grade estimate was made by both polygons and cross sections. The polygonal reserves are stated as Probable reserve at a cut-off grade of 0.03 Au equivalent of 4,148,000 tons at 0.042 opt Au and 2.604 opt Ag. A cut-off grade of 0.02 Au equivalent resulted in a probable reserve of 5,918,000 tons at 0.033 opt Au and 2.046 opt Ag. Steelhead’s east west cross-section geological reserve of 0.03 Au equivalent with a cut-off of 4,108,717 tons of 0.03 opt Au. At a cut-off of 0.02 Au equivalent the reserve were 5,423,533 tons of 0.02 opt Au, which agrees with the tonnage estimate by the polygonal method. The US Borax and Steelhead data clearly demonstrate the potential for open pit mining; however, in today’s environmental climate this is no longer a viable option. Management is pursuing the more environmentally acceptable option of developing a 2-3 million ton underground Au-Ag deposit, and shipping the ore to an off-site mill.
A large copper anomaly is located west of the mine. Recent geophysical work (CSAMT) has discovered several large-tonnage copper-gold targets over 200 ft. in diameter and up to 400 ft. wide, west of the mine. This is similar to other VMS deposits containing gold and silver.

A number of metallurgical studies have been completed on the deposit, the most recent of which was by Hazen research in 1989. Their best Au and Ag recoveries were obtained using rougher flotation and nitric acid preleaching followed by carbon in leaching. Metallurgical recoveries using flotation are approximately 85%. When treated with nitric acid and leached using cyanide the recoveries increase to between 93% and 95% for both the gold and silver.

This is a VMS which was remobilized and over printed by epithermal Au-Ag mineralization. Mineralizing fluids invaded a sequence of tuffs, siltstones and graywackes, depositing silica, adularia, and Au-Ag mineralization in a blanket up to 210 feet thick and over a strike length of 7000 feet. Grades in this disseminated deposit are on the order of 0.03 – 1.01 opt Au and 1.2 – 234 opt Ag. The disseminated mineralization dips the west making it favorable to underground mining. The continuation the of Big Stope pipe can be inferred from the existing mine workings. It is about 100 feet in diameter and is inclined to the south at 45 degrees.

The source of the mineralization is a series of mineralized “feeder pipes” located west of the mine workings. These were initially “black smokers” located in a deep trench on the Jurassic sea floor. Typically this type of pipe is rich in Cu, Pb or Zn. In this case several such mineralized pipe-like zones have been located using CSAMT. We believe that they contain rich deposits of Cu-Au, and are excellent targets for the planned drilling program.land rises very steeply. All of the area is heavily forested with fir and cedar and covered with rainforest vegetation. Snow may be expected above 2000 ft. during the winter months.

With the steep topography, camp grounds and proximity to the Nooksack River and Wells Creek it will be necessary to locate any mine tailings and waste dumps above the mine area where the topography is not as severe. Power and water are readily available.

Drilling has indicated mineralized sections well above the cutoff grade of 0.02 opt Au equivalent and over 200 feet in length. There is also a very good chance to extend the outlined mineralized ore because the drill holes on the east side encountered some mineralization.

The company will post a Bond with Bureau of Land Management, precure estimates with mine contractors to bring the mine to safety and compliance standards, stake and file additional claims, do road work, complete needed work in the Blacksmith level, begin a surface exploration and sampling program, do additional drilling and complete a NI 43-101 report for final analysis and review.

Strengths The best performing metal this week was palladium, up 2.04 percent as hedge funds increased their net-long position in the futures market to a five-week high. Gold traders and analysts are mostly bullish going into next week in the Bloomberg survey amid mixed signals over progress in the U.S.- [...]

Markets Bet That Gold Could Triple to $4,000

This presentation is pro-forma, subject to change, and strictly for those that qualify as ACCREDITED or SOPHISTCATED INVESTOR (s) as defined under the Financial Services Authority and to whom it is directly addressed and delivered to from Unity Goldmines, Inc.This presentation is for discussion purposes only and is not an offer to buy or sell securities.